A community page for ideas and discussions about Lightning Launcher, bug reports, and showing off your layouts.
https://community.lightninglauncher.com/

by broacher
On my last phone switching, back in January 2017, I had to re-purchase LL in order to get it to work (I had initially purchased it a year or so earlier).

I wrote to Pierre questioning this but never received an answer as to why. Anyhow, this last phone died last week and I'm rebuilding things on a new one. When I went to Google Play and installed LL it didn't say 'Install' but instead just showed the purchase cost, and after installing it says it's only a trial.

Is LL not transferable to new phones? It would be the first app I've owned that would be like this. Or is there some step I'm missing to get the new phone registered without paying once again? Like, when the trial expires, will it recognize me as a registered past-purchaser?

I confess I'm not nearly as code-savvy as the bulk of LL users, but I do love so many of its unique features and so I'm hoping to stick with it. But I'd like to know why I need to keep repurchasing it when I move to a new phone.

by brunoisa10
No we never have to re-purchase.
I'm on my 6th smartphone since I have purchased LLx.

Check on your apps on playstore

by broacher
My Google account hasn't changed, just my phone. But when I go to Google Play, it only shows a price instead of an 'upgrade' button. When I tried installing it, it gave me the message that it was a temporary trial only.

I ended up going back and installing my newest backed up version of LL, which is version 12.91 (it's currently 14.3). And the older version seems to have some glitches.

How do I get LL to recognize me as a registered user and install the newest upgrade?

by F43nd1r
Ah, so you purchased the discontinued trial version instead of the real deal. As you said you've purchased LL twice, you might own the latter one already.

by broacher
All I remember from 2017 is that I wrote to Pierre about my confusion that I thought since I bought the earlier version, I was entitled to the update on my (then) new phone. And the new version was offered as a unlock of the trial. But I never got a reply about any of this, so I decided to shrug and purchase it again anyhow. I've grown very dependent on LL, and really have lauded it over other launchers to many looking for an alternative.

A crop of my receipt from Google Play attached. 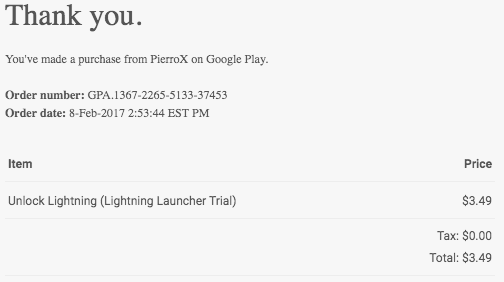 
And now that I'm moving to another phone, does this mean I have to purchase a newer version once again?

by Pierrot
I don't reply anymore to this kind of question by email because answers are in the google help center, and everything related to download and purchase is entirely in the hands of... google (except refund, developers can do that most of the time).
Everything that has been downloaded or paid one day can be restored later, no matter if the app has been unpublished or not. You may have to dive in one of these semi hidden screen in the play store app but once again, these are the google rules.

by broacher
Thanks for the response. I've spent another twenty or so minutes drilling around the Google Play site but found nothing but 'check that it was the same account' as a possible answer. As I only have one account, I don't know where to go from there. I did discover that my first purchase of LL was in 2014. I also discovered, at least by old review comments, that I'm certainly not alone with this problem.

What I think I'll do is post the problem on the Google Play help forum and see if any other LL users have figured out how to fix this.

If I do find out anything, I will come back here and share it with anyone else who may be experiencing this difficulty.

One question though: is the fact that my 2017 purchase was the LL Unlocker have anything to do with why that app (the Unlocker) doesn't appear in my library or Google Play -- other than a line on my order (see above screen grab)? I just want to know if there really IS a way to go from an unlocked older trial to the newest version. If not, I won't waste any more of my time on this.

by Pierrot
In theory there's a screen with all the apps you downloaded from the "birth" of your google account, and from there you should be able to reinstall the app, even the older ones (I don't want to imagine all the storage it needs...), and not depending whether there are paid or free (an app cannot move from free to paid).

In app purchases should also be restored at the app startup automatically, having the effect to unlock things as appropriate.

When I think at this, there are two reasons where the above stuff would not work as expected: Anyway, my initial answer was that I don't answer to this kind of question because I'm bored to endlessly repeat the same thing, especially when it deals with very old purchases. I understand how unfriendly is this explanation, and I'm sorry for that, but somehow this is the truth

. I also don't read anymore my mailbox, so... problem solved.

In the end, the final answer I make to everyone:

please give me your google order number, and I'll refund it

by broacher
Once again Pierrot, thank you for the detailed response.

There is a section called 'Purchase History' in Google Play which I had already browsed in an attempt to figure all this out. Here's what I found: 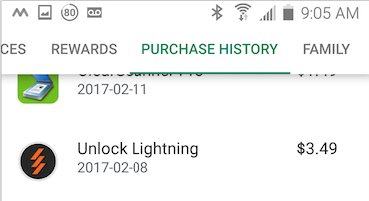 And I'm sorry to be a PITA about this, but I feel like I've already gone down this road before, and ended up simply paying for the new upgrade in 2017 -- should I need to do it again in 2019? And I understand the frustration you must have with all those emails but maybe you could work out another way to handle things so you get less of this? I mean, minimally -- how about a top note in the 'Read More' content of the app's listing on GPlay? Something like:

And, as I have already supplied (here, in this thread) my purchase number, I will repeat it here:

Seriously, you have created an awesome product. One that, as I have said, has inspired me to promote it with other users/would-be purchasers. I would love to continue promoting it to others but the whole update re-install glitches with Google Play really should be sorted out if you want your users to remain Lightning Launcher evangelists. Frustrating for you to fix? Time wasting? Sure. But like so many of these kind of tasks, unavoidably necessary.

Thanks for your time and explanations.